For those of you who remember the nights out of your youth, Aftershock will forever be a colourful drink. You would down it when you couldn’t bear to consume any more beer!

It’s also a popular slot game from the WMS software house! It earned a cult following amongst players ever since its release back in 2014.

But what do you need to know about this game and is it worthy of your hard-earned bankroll? Let’s find out!

Layout and Design – A Simple But Earth-Moving Slot Game

At first glance, Aftershock appears as little more than a classic mechanical reel slot, and that deploys a 3×3 reel grid in the form of an upright fruit machine.

However, the team at WMS have worked hard to introduce some compelling gameplay features, creating a visually retro-slot that’s chock-full of reel shakes, nudges and randomly triggered bonus rounds.

So, don’t be fooled by the fact there are only five fixed pay lines on offer during the base game, as this doesn’t do justice to the depth of gameplay and various multipliers.

The slot features a genuinely competitive RTP rate of 95%, although this increases to 97% when you activate the ‘Big Bet’ feature (we’ll have a little more on this later). 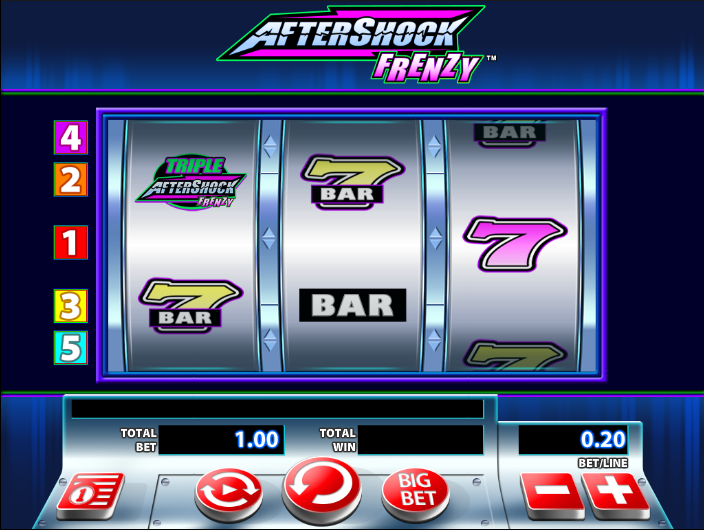 This diverse appeal of this slot is also reflected by its betting range, which should incentivise both casual and serious gamblers across the board.

You can select various coin sizes between 0.05 and 50. Therefore, creating a scenario where you can activate all five pay lines for as little as £0.25.

Conversely, you can set a maximum bet level of £50, whilst deploying an ‘Autoplay’ feature to fix your stake for a predetermined number of spins.

But what about the symbols, we hear you ask? Well, there are actually very icons on show here, but those that do appear will be familiar to anyone who has ever played a fruit machine.

These include yellow, purple, green and red sevens, the latter of which payout at 60x your stake when you land three on a single payline (this is recognised as the highest-paying base game symbol).

There’s also the standard ‘Bar’ symbol, which pays out at 10x your stake when you land three across the reels, whilst you may notice unusual icons that combine both sevens and bars.

This slot features a wild symbol too, with this capable of substituting for all other icons apart from the Double and Triple Aftershock Frenzy visuals.

Payouts and Features – A Classic Slot with Some Exceptional Bonus Features

The Double Aftershock symbol appears only on reels one and three. It fixes the Triple Aftershock alternative on reel two.

When landed, these icons can also act as wilds, whilst they payout at the following multipliers:

This leads us neatly onto the Aftershock Frenzy feature. This can be randomly triggered during any spin. It will reward you with a select number of free spins (up to a maximum of seven).

The best aspect of this bonus is that each spin represents a guaranteed win and landing any Aftershock symbols within one position of the centre payline will activate the ‘Shocking Wilds’.

Also, the Aftershock symbols will remain in place for the rest of the spins. There are some genuinely impressive prizes to be had during that stage of the game!

You’ll also be pleased to know that this slot offers a ‘Big Bet’ option. It does cost more of your bankroll but rewards you with five spins and the potential for additional payouts. This is because all Aftershock symbols become triples on the reels during this time. They replace the doubles and boost the frequency and sizes of your wins.

Therefore, the RTP rate increases when the feature is deployed. It makes for a fascinating addition to an unashamedly retro-slot game.

If you have any questions regarding the Mark Jarvis casino games, please contact our team. Alternatively, you can check out our full range of slot games available on the Mark Jarvis website.