It’s a testament to the popularity of board games that they’re now being reimagined for the digital age, with Monopoly having inspired a host of slot game titles throughout the years.

One of the most exciting iterations is ‘Epic Monopoly 2’, which is the brainchild of the WMS studio and combines a colossal reel set with truly spectacular wilds.

But what else do you need to know about this slot and is it one for you? Read our review to find out more.

Layout and Design – Traversing the Fire and Brimstone

As sequels go, Epic Monopoly 2 represents an impressive effort from the team at WMS. The slot boasts some enduringly charming visuals.

The game also features two distinct reel grids. It is set against the backdrop of a lavish stage that’s flanked by pillars and deep-red curtains.

The first of these is a standard, 5×4 reel set that features prominently during the base game. On the right of this sits a grid with five additional reels and 12 rows, with these combining to offer 100 pay lines and access to potentially epic wilds.

These gameplay elements contribute heavily to a competitive RTP rate of 96.01%, which means that you earn frequent wins that enable you to make the most of your bankroll. 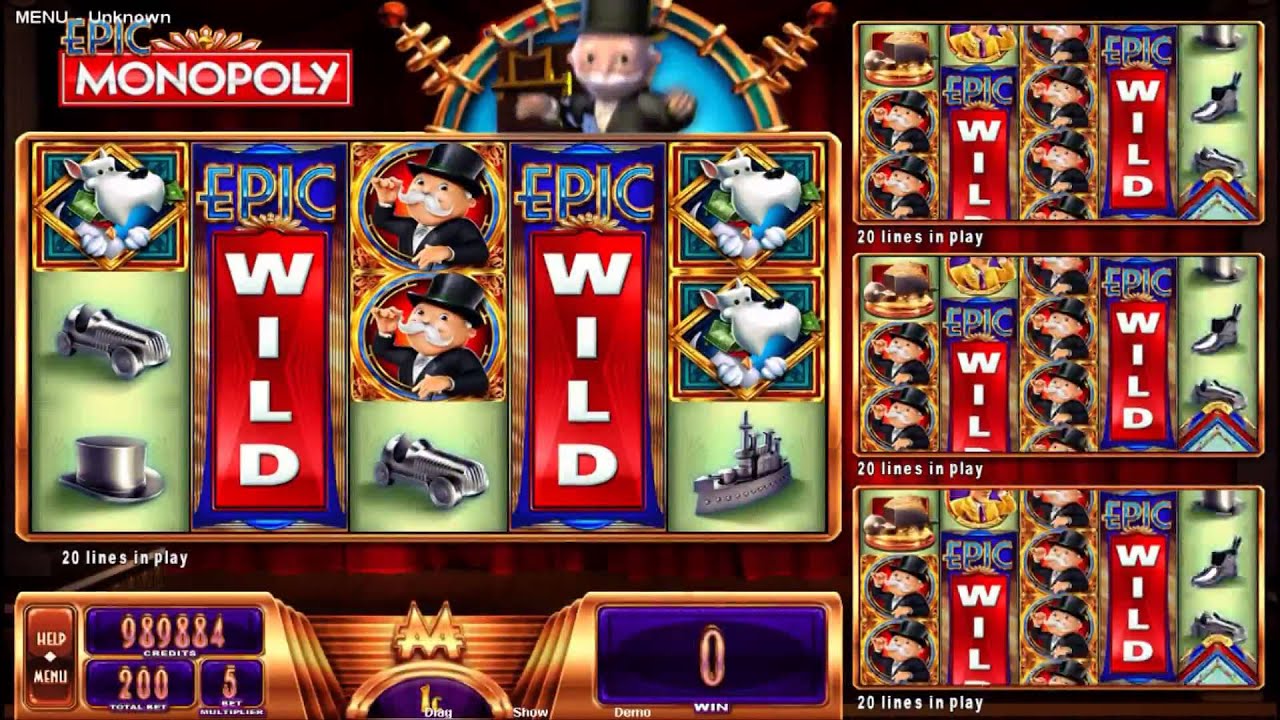 Before you delve into this digital iteration of the classic Monopoly board game, you must set your betting level and understand the role of individual symbols.

The first stage is relatively easy to achieve, as you manipulate the arrows on the betting panel to select a coin size of between 0.50 and 250. This will regulate your stake per spin, whether you wager a minimum of £0.50 and the maximum bet level of £250.

You must set your stake manually before each spin too, as this slot is one of the few on the market that doesn’t offer an ‘Autoplay’ feature.

When you spin the reels, you’ll also notice a slew of familiar (and well-designed) symbols flashing across the screen. These include the cuddly dog and similarly iconic symbols such as the car, top hat and ship, whilst Mr. Monopoly also features prominently.

The Monopoly Board is the highest-paying base game icon the board, as you’ll earn a multiplier of 50x your stake when you land five on a single payline.

Look out for the games Epic Wild symbol too. This can appear and dominate entire reels on the Colossal Reel set. It also dramatically boosting your chances of winning.

Payouts and Features – A Game Chock-Full of Bonus Rounds

This is one of many bonus features available through the slot which bring the gameplay to life. It creates several opportunities to claim lavish cash prizes.

The first of these is the ‘Wheel Bonus’ feature. This is triggered when you land three or more bonus scatter symbols on reels one, three or five. Landing four, five or six scatters will multiply your stake by 10, 50 and 100-times your stake respectively. It also introduces the aforementioned wheel.

You’ll then spin the wheel to reveal a random prize. Rewards on offer include 10x multipliers, 30 free spins, two, five or 10 dice rolls for the ‘Around the Board Bonus Feature’, the ‘Chance Bonus’ and the ‘Spin Again’ feature.

Once the latter is awarded, you’ll earn up to five-times your stake before the feature draws to a close.

As part of this feature, you’ll also have the chance to pick from five cards to win a cash prize. The prizes include up to 10x your stake, 20 free spins, 10 dice rolls for the Around the Board Bonus feature and Pick Again.

The Around the Board Bonus feature is the slot’s final bonus round. It allows you to take a nostalgic trip around the iconic Monopoly board by rolling the dice.

When Mr. Monopoly lands, you’ll win a prize. The cash jackpot rise as high as 1,500-times your bet in some instances.

All things considered, Epic Monopoly 2 is an exceptionally well-balanced and popular slot game, and one that combines frequent base game wins with relatively large prizes.